Those closely associated with the University hear about Michigan Men everywhere– it is used in reference to coaches, players, students, University officials, broadcasters, and fans. The term is one of the least-defined terms on the University of Michigan campus, as Michigan Man is used to describe a broad range of individuals: from dedicated, ethical men to alleged criminals. For example, Bo Schembechler, the famous Michigan coach of the 1970s and 1980s, is universally accepted as 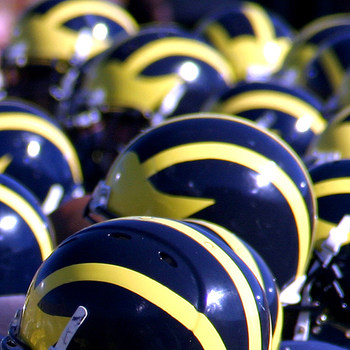 a Michigan Man with superior ethics. However, local newspapers also label former Michigan football player Carson Butler a Michigan Man, despite allegedly breaking a fellow Michigan student’s jaw. As the label is increasingly used in misguided fashions, the definition of the term is becoming increasingly unclear. This is very detrimental; as those who aspire to become Michigan Men lack clear direction on the prerequisites to earning the distinction. Compounding the issue, the media continually uses the term in undisciplined ways, which further inflames the problem. As the media continues to diverge the definition of the term as a result of inconsistent use, those who aspire to reach theMichigan Man status become increasingly confused as to what that pathway entails. In order to remedy this situation, members of the University of Michigan community need to come to a consensus on what the term actually represents. I believe the term encompasses a complex combination of requisite traits, which include understanding Michigan culture and tradition, exhibiting the morals promoted by the University, and yes, maintaining a constant loyalty to the University of Michigan.

As with all vocabulary in the English language, Michigan Man is a term which holds whichever meaning society assigns it. While there is no right or wrong definition in an absolute sense, the optimal interpretation of the term will honor its historical roots while best adjusting for current times. Finding this optimal definition involves a deep understanding of the history of the term, the temporal effects which altered the meaning over time, and the causal implications on the affects of the term on others. Additionally, the definition must satisfy those in the Michigan community. Phil Callihan, editor of UMGoBlue.com, refers to the definition of a Michigan Man as “a list of criteria for inclusion in our great maize and blue colored tent.” One must ask: what exactly should this list of criteria be?

The exact origin of Michigan Man is unknown. However, it should not surprise anybody that the two

most cited origins come from two of the University of Michigan’s most revered men: Fielding H. Yost and Bo Schembechler. Many believe the first reference to a Michigan Man was at a Michigan Basketball press conference when Bo Schembechler fired then-coach Bill Frieder in 1989. Frieder had taken a job starting the following season with Arizona State, and intended to coach Michigan for the duration of the NCAA tournament. Bo’s response, that “[a] Michigan Man will coach Michigan, not an Arizona State Man” was a declaration that only those who believe the University of Michigan is the ultimate coaching destination, and thus was loyal to Michigan, could be considered a Michigan Man. This interpretation is accepted universally.

Many in the Michigan community use this event alone to frame their definition of a Michigan Man. It  should be noted, however, that it was not Bo who used the phrase first. Therefore, I believe it is a mistake to solely use Bo’s words to define Michigan Man – he didn’t even create the term! Fielding Yost, upon his retirement in 1942, took his final speech as athletic director as an opportunity to analyze what makes Michigan unique:

“But do let me reiterate the spirit of Michigan. It is based upon a deathless loyalty to Michigan and all her ways; an enthusiasm that makes it second nature for Michigan men to spread the gospel of their university to the world’s distant outposts; a conviction that nowhere is there a better university, in any way, than this Michigan of ours.”  (Bacon)

At first glance, it is easy to recognize the similarity between Schembechler and Yost’s words. Both involve the belief that Michigan is the place to be, and both have tremendous loyalty towards the school. Here, loyalty involves not only a commitment to Michigan, but pride, passion, and confidence that Michigan is the best. Again, this is a common stopping point amongst others in the Michigan Man debate. However, it is necessary to consider a broader analysis of history, which exposes additional requirements of becoming a Michigan Man.

Michigan Man from a Historical Perspective: Love of Michigan Culture

The University has a storied culture of innovation, tradition, and a confident student body. Michigan is an institution of innovation in the fields of athletics and academics. Examples of this include the

invention of the linebacker position and no-huddle offense in football, being the first academic institution to utilize the seminar method of study, the construction of the first intramural building in the country, and being the first prestigious University of the nation to admit women into the school (Wikipedia). In my observation, traditions at Michigan involve a history of academic excellence since the University’s inception, using the block M since 1905[1], and having the same official school colors since 1867. Michigan’s traditions and innovation are not the only items that make the school unique; I believe Michigan also boasts a time-recurrent theme of arrogance. While the official origins can only be speculated upon, it is likely that Fielding Yost helped instill the egotistical spirit in Ann Arbor. Yost never directly applied for the Michigan football coaching job. While he was head football coach at Stanford, Michigan’s administration wrote him and offered the head coaching position. All Yost was asked to do was sign a contract. Instead, Yost replied with 1000 pages of newspaper clippings and articles proclaiming him a genius. Yost was not happy with just securing the Michigan job; he made sure Michigan’s administration truly understood how good of a coach they were getting. When he was first arrived at the Ann Arbor train station in 1901, he was asked how the football team would do that year despite having never met his team. Yost, without doubt, declared they wouldn’t lose a game. This was a bold statement: The team only won 60% of their conference games the year prior. However, he followed through with his promise not just in his first year, but in his first four.[2]

Seventy-seven years later, a special conference convened on Michigan’s campus to question if narcissism had its place amongst an ethical student body. President Fleming and others recognized a growing narcissism of its students on campus about their school and academic abilities. On November 16-18th, 1977, records suggest that University officials defended the narcissism, and ultimately decided morality and narcissism could coexist on campus (Board of Regents). This decision adds weight to the argument that egotism is a component of being a Michigan Man. Ultimately, A Michigan Man must appreciate the University’s culture, including being confident in the thought that “[n]o school is better than this Michigan of ours” (Bacon). Phrased differently, I believe a Michigan Man is loyal to Michigan, and the origin of their loyalty is confidence in the superiority of the school. I am not saying that Michigan Men should be condescending towards others in a display of arrogance. A true Michigan Man can balance confidence in themselves and their academic institution without violating common rules of social decency.

Records indicate that part of the University culture includes the attempt to instill values in its students. Since the first day the Catholopistemiad was founded under Father Gabriel Richard, up until the present under the tutelage of President Mary Sue Coleman, Michigan students have been trained in the areas of morals and ethics. In fact, Father Gabriel Richard ensured part of the original curriculum, which contained 13 subjects, included a department of “ethicas.” “Ethicas” was a word Richard created to represent the academic study of ethics. He created the term because he thought his commitment to ethics was a revolutionary idea in American education and deserved its own word. Years later, when Fielding Yost built the first intramural building in the country, the justification presented by the regents to fund the project was that it would “discourage unethical behavior, such as drinking” (Regents) – further evidence that the school placed an emphasis on ethical behavior in its student body. The Narcissism conference referenced earlier was a part of the larger department, “The University Values Committee.” This committee created a course at Michigan entitled “The Relevant Values of Today” in 1975. This class, as documented by Mary Masters, the coordinator, taught students to mold their own values based on how their choices would impact others (Office of Ethics and Religion). All of these examples demonstrate Michigan’s commitment to instilling morals and ethics in its students. Even today, Michigan’s mission statement reads:

The mission of the University of Michigan is to serve the people of Michigan and the world through preeminence in creating, communicating, preserving and applying knowledge, art, and academic values, and in developing leaders and citizens who will challenge the present

and enrich the future.

A Michigan Man must be loyal to Michigan, this much we all know. However, a true Man of Michigan must be the type of man Michigan teaches its students to become. Thus a prerequisite in becoming a Michigan Man involves exhibiting the behavior Father Gabriel Richard, Fielding Yost, Bo Schembechler, and Mary Sue Coleman all held in common and all were united in trying to promote. This involves dedication, passion, and leadership. It involves a commitment to academics, loyalty to other Michigan Men, and the resolve to accomplish great things in the right legal and ethical manner. I believe that a candidate must possess these appropriate behavioral traits before they can claim to be a Michigan Man.

One of the beauties of the term Michigan Man is it motivates people to engage in more moral and ethical behavior, as people seek to earn the title and tend to perform whatever requisite actions to earn it.