Notre Dame received four very solid verbal commitments in September. Stephon Tuitt is a huge get and is one of the top defensive ends in the country. With offers from Aubur n, Clemson, Florida, Georgia and LSU (among others) Tuitt is a great combination of size and speed. At this point he relies a bunch on his pure abilities, so he will have to work on his technique and strength in college. He could possibly end up a defensive tackle as well. Wide receiver DaVaris Daniels is a well rounded pass catcher. He has good hands, nice speed and runs pretty good routes. The 6’3” Daniels also has offers from Illinois, Iowa, Miami, Michigan and Michigan State among others. Joining Daniels in the Irish receiving corps will be George Atkinson III. Having offers from all over the country Atkinson also plays safety and running back, but his highest upside is at wide receiver. The best way that I can describe George is a more explosive version of DaVaris Daniels. These two will make for a very scary duo for years to come. Atkinson may also return punts and kicks as well. George’s twin brother Josh is a good looking cornerback prospect. He is a cover corner, who has been overshadowed by his brothers talents, but is a good get for the Domers. Josh has offers from Arizona, Arizona State, Oregon, Oregon State, and Washington.

The Wisconsin Badgers had a great month of October gaining seven verbal commits, five of which were on offense. Ohio wide out A.J. Jordan has a nice blend of size and speed to go along with really good hands. Jordan has offers from Cincinnati, Illinois, Michigan State, Michigan and North Carolina among others. In the end, Jordan chose Bucky over the Wolverines. Fellow receiver Kenzel Doe did not receive the same amount of attention as Jordan, but he has a chance to make a big splash in Madison. Doe is more of a quick twitch slot type receiver, who may come in and compete for both returner positions from day one. Huge offensive tackle Ray Ball is a perfect fit for what the Badgers do on offense. Ball needs to work on his foot quickness quite a bit, but he is the perfect “road grater” type of lineman. Tyler Marz is a bit of a sleeper OL, but again, he looks to fit the mold of the typical Badger offensive tackle as he stands 6’8” tall. Fullback/running back Trayion Durham could be the next John Clay for the Badgers. At 6’1” 230 Durham is a load to bring down, but also has good speed (4.56 40) to break the big run. During his junior season Trayion had 1,113 yards rushing to go along with 14 TD’s. Defensively Wisconsin added to nice looking defensive end prospects in James Adeyanju and Jesse Hayes. Both Adeyanju and Hayes are explosive pass rushers, who should make a great combo for years to come.

Illinois had a decent few months as well, nabbing 4 good prospects. Defensive tackle Clint Tucker is probably the best of the four and is a real nice get for the Illini. Originally a Kentucky verbal, Tucker has nice size for a d tackle and does a decent job of staying low at the point of attack. Clint needs to improve on his moves and technique when he gets to college. Scott McDowell is an offensive t 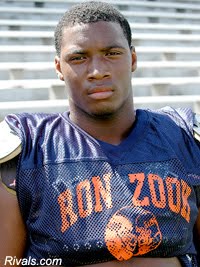 ackle who good at both pass and run blocking. He has a really good motor and gets to the second level very well. He will have to bulk up a little of course, but he is a pretty good looking OL prospect. Linebacker prospects Ralph Cooper and Henry Dickinson are both good athletes with speed and range.

Nebraska added a huge commit in top 5 running back Aaron Green. The Texan is as close to a complete back as there is in the 2011 class. He has explosive speed and amazing change of direction. All he needs to do is add a good 10 pounds and he’ll be a back to contend with. During his sophomore and junior seasons Green accounted for over 3,000 yards rushing and 38 rushing touchdowns. He has offers from almost every football powerhouse out there including Alabama, Auburn, Georgia, LSU, Oklahoma and USC among others. The Huskers also landed a talented receiver in Taariq Allen. Taariq is a tall kid at 6’3”, but is not overly fast. He looks like he’ll be a possession receiver in college. Allen originally committed to UConn and also has offers from Tulane and Wisconsin.

Inside linebacker prospect Melvin Spears is the lone pick-up for the Iowa Hawkeyes. Melvin has a great motor and has a knack of getting to the ball. At

6’2” he has a great frame and a lot of room to put on 20 pounds or so. Spears also has offers from Arkansas State and Minnesota. Knowing the Iowa system, Melvin will grow into a good linebacker.

Athlete Roger Williamson could line up on either side of the ball for Michigan State. In my opinion his highest upside is a corner, where he is super physical and aggressive. He has pretty quick feet and decent hips as well. Williamson also has offers from Cincinnati, Indiana, Kansas, Maryland, West Virginia and Wisconsin among others.

Minnesota dipped into the south for their two September commits. Texan Cameron Brown is a big wide out at 6’2” 195 lbs. He is not a burner by any means, but will be a good possession receiver for the Gophers. As a junior he had 202 yards and 3 touchdowns. Cameron also has an offer from Western Kentucky. Russell Haughton-James is an offensive tackle from Weston, Florida. He is a bit of a sleeper, but has great size, feet and quickness. Russell chose Minny over Florida Atlantic, Florida International and South Florida.