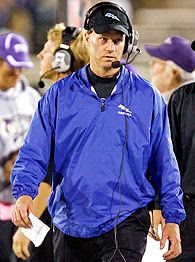 FB Mike DeWitt: The play of the FB is critical to the success of the triple option. While his role as FB does not allow for a lot of big plays, DeWitt was the model of consistency a year ago. Amazingly, DeWitt was never stopped for negative yards last season.

In order to mask the lack of size on the defensive line, the Falcons use a 3-4 defense under the direction of Co-Defensive Coordinators Charlton Warrant and Steven Russ. The Falcons use a variety of blitzes to both get after the QB and stop the run. Blitzing is a critical component of the Air Force defense in order to offset struggles with traditional defensive schemes.

The Falcons back seven is almost completely new after losing 6 starters to graduation. The most experienced player in the secondary is FS Anthony Wooding who is responsible for aligning the defense and making the defensive calls. Wooding was 5th on the team in tackles a year ago from the SS position but has moved over the FS position made by First Team Mountain West safety Jon Davis a year ago.

Overall the defensive unit is short on size, experience and, talent.

LB Alex Means: Means was 3rd on the defense in tackles and led the Falcons in sacks a year ago with 6. Means mans the all important hybrid DE/OLB position that is responsible for creating havoc in the opposing backfield.

The Falcons normally have the advantage with their rush offense is nearly every game they play. The combination of offensive system and technique catches most defenses off guard, especially when teams have little time to prepare.

While only one game into the season, the Wolverines rush defense has been shaky. The Wolverines do enjoy a tremendous advantage in size and talent.

Even with the loss of Blake Countess the Wolverines have a clear advantage going into the game. The Falcons do not emphasize the passing game which exists almost exclusively off of the run game.

While they failed to show it against Alabama, Michigan’s offense line has number of talented and experienced players. The return of Fitz Toussaint to the lineup should also prove to be a big boost to the Wolverines running game.

Holding the Wolverines to less than 200 yds will be viewed as a success by the Falcons who are badly overmatched in this area.

Michigan has more than enough talent to produce big plays in the passing game against the Falcons. The key for Michigan will be getting consistently accurate passes from the QB.

The Falcons lose three of four starters from a year ago in the secondary. Air Force gave up 355 yds passing to Idaho State a week ago in their win.