No unit was happier with the decision to start Devin more than the WRs. Devin’s game opens up things for the WRs and allows them into part of the route tree that Michigan seldom uses with Denard at QB. Jeremy Gallon had a nice bounce back game after really struggling against Nebraska. For a guy his size Gallon has knack for making plays on the ball in the air and Michigan doesn’t hesitate to throw him jump balls in the endzone. Drew Dileo had another productive day, catching 4 passes for 69yds and the game’s first TD. Even Roy Roundtree got into the act, making a circus catch between two defenders to setup a 2nd half Michigan TD.

The one disappointment has been the disappearance of Devin Funchess in the passing game. Michigan tried getting Funchess involved on the goal line several times but were unsuccessful and he finished the game with just 1 catch for 7 yards.

The offensive line is regressing, there’s just no other way to put it. The line has struggled to run block all season but now the guys up front are having issues in pass protection as well. Through the season, pass protection has consistently been the one area where the line has done a very good job. That ended on Saturday as the line found themselves flat footed and overpowered at times throughout the game. The interior of the offensive line played especially poorly and had all kinds of issues in both run blocking and pass protection. The lack of push from the guards and center is nothing new but watch defenders run through or around the interior of the Michigan line was disconcerting at best.

After weeks of solid play, the defensive line finally caved and got themselves pushed around. Minnesota was able to grind out chunks of yardage on the ground and if not for the score getting out of hand, the Gophers would have likely posted a big rushing tally. Unlike the last 5 games when the big guys up front were able to hold the point of attack and at the very least reroute the 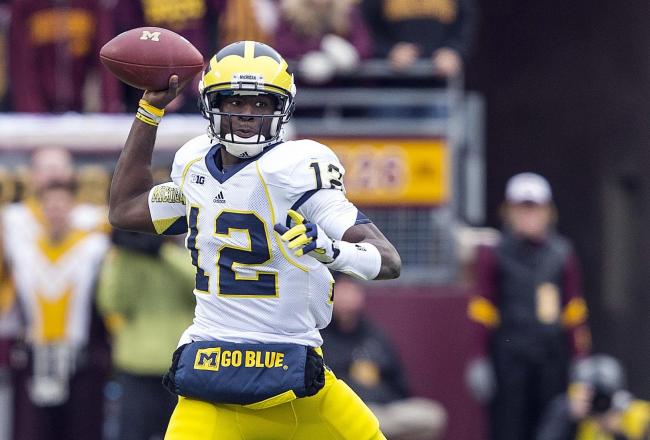 man across from them, the defensive line was pushed back or sealed off throughout the game. Quinton Washington and Will Campbell had previously been able to occupy offensive linemen and shed blocks in pursuit, that rarely happened on Saturday and Michigan paid the price from a numbers standpoint.

Michigan continues to get very little in the way of pressure on the QB from the front 4, outside of the times when Jake Ryan slides down and puts his hand on the ground. The defensive ends had been making up for the lack of sacks with pressures and holding the edge in the run game but ends had some trouble with that in this game. The defensive line accounted for zero sacks and only 1 TFL on the day which is not something that is sustainable if Michigan wants to produce good defensive play.

Kenny Demens and Jake Ryan led the way again from a tackles standpoint, with Demens making it into the double digits. Issues up front led to the LBers having to fight off more blocks than they have in the past and there were issues with leverage and taking good angles to the ball carrier. As a whole, the LBers played cleanup more than anything else which is out of character for them based on what has been happening the rest of the season.

Michigan is ranked very highly in pass defense but the numbers are misleading to a degree. From a statistical standpoint the secondary has held opposing teams to very low numbers. The actual play on the field tells a different story. Michigan has been fortunate in not playing a lot of teams with productive passing games as the cover guys have had their share of issues of late. More accurate throws would have resulted in a number of big plays on Saturday and Michigan was lucky to avoid giving up a ton of yards. On several occasions the J.T Floyd and Raymon Taylor were beaten and simply interfered with the opposing WR to prevent a big play. At one point Michigan was called for back to back pass interference on plays where the cover man was beaten badly or lost in space. Jordan Kovacs did come up with a big TFL that stalled a Minnesota drive.

Will Hagerup has been punting so well this season he was due for a stinker. That stinker came on Saturday as Hagerup averaged just 29.3yds per punt and had two shanks in the game that gave Minnesota great field position.

Dennis Norfleet continues to run hard and make guys miss on kick returns but big plays continues to be elusive for the diminutive back. There are times when Norfleet probably should just take a knee in the end zone but with his speed and quickness he always feels like there is a play to be made. It is difficult to really judge Norfleet harshly on plays when he probably shouldn’t come out of the end zone because of his big play potential and the fact that he has often made sometime out of the nothing.

The kick coverage unit unfortunately struggled to contain Minnesota on kickoffs. The Gophers busted off a 45yd return early in the game and continued to get good returns, averaging 25yds per kick return.

A: Unit played as close to flawless as possible. Unit played well enough to win the game on their own.

B: Unit had a major positive impact on the game but also had several assignment/execution miscues.

C: Unit did not negatively or positively affect the game. Unit made key positive plays along with several errors.

D: Unit made multiple critical errors that could potentially cost the team a win. Unit blew assignments and had poor execution across the board.

F: Play of the unit was bad enough that it could directly cost the team a victory.

Note: Plus and minuses denote degrees of the grade.