Over the last 2 1/2 months of the season Michigan, zeroed in on prospects that I will call “The Final 5.” Michigan invested more time and effort into 5 key players over the

final stretch of the season than any others. Michigan also made inquiries into the interest level of several more prospects but they will not receive as much coverage here. The Final 5 included CB Armani Reeves, OL Alex Kozan, TE Sam Grant, OL Jordan Diamond, and OL Josh Garnett. WR Jordan Payton, TE J.P. Holtz, TE Taylor McNamara, and WR Monty Madaris were all contacted by the Michigan coaches, but there were varying levels of interest from both sides. During this same period Michigan removed from the class or lost the commitment of 3 players: TE/DE Pharaoh Brown, CB Anthony Standifer; OL Caleb Stacey. Michigan also added the commitments of 3 players, WR Jehu Chesson, WR Amara Darboh, and newly minted Wolverine DT Willie Henry. The new academic standards put forth by AD Dave Brandon and President Coleman was not an issue for any of the above cases. Michigan was simply unable to land said players for a variety of different reasons. While the new academic requirements placed upon the Michigan coaches had an impact on Michigan’s ability to recruit student athletes, in the case of the Final 5, and the other players listed above, academics did not play a role in Michigan’s recruitment of them.

While it is premature to make a final analysis on the recruiting abilities of Brady Hoke and the other Michigan coaches after just one year, an examination of the approach, and results of the current class is possible. In an attempt to make sense of both the class as a whole, and the close out of the class in particular, I put forth the following hypothesis:

“The Michigan football coaches, while masters of the blitzkrieg recruiting approach were ineffective when faced with a protracted war of attrition for prospects.”

This past spring, Michigan got out to one of the fastest starts in the history of the recruiting season (outside of the University of Texas). Between March 24th and July 31st, Michigan landed 22 prospects at a ridiculous rate of 4 commitments per month. Michigan fans had never seen anything like it, neither had the so called “recruiting experts. In an interview with the Detroit News, renowned recruiting analyst Tom Lemming declared:

“I’ve never seen anything like this. These kids are committing to U-M without seeing other schools. U-M is everywhere.”

Lemming was absolutely right, Michigan was everywhere. Hoke and his crew of fast attack recruiters rolled through the Midwest like a Panzer division through the French countryside. Michigan snatched up commitments left and right in full blitzkrieg style. It was a masterful and highly effective approach that Hoke and his coaches deserve full credit for. Lemming was right about something else too though, kids were committing without seeing other schools. Michigan pounced on two kids from a traditional Spartan stronghold, Farmington Hills Harrison, before Mark Dantonio had time to react. Hoke and his staff deserves and should receive full credit for the lightning fast way that they were able to target, impress, and sell kids on Michigan. Locking up 22 prospects before August is something most coaches only dream of. There is an interesting angle of this story that has yet to be examined however. 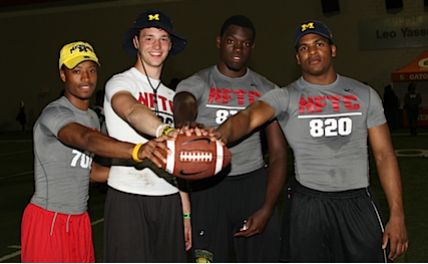 Michigan swift recruiting approach beginning in the spring was further boosted by its policy disallowing committed players to take visits to other school. Recruits were told up front and before they committed, that if they decided to take visit to other schools, Michigan would no longer consider them a committed player. At least 3 commits tried to test this policy, two of which decided better of it and cancel their plans to visit other schools. One commit, Pharaoh Brown, took an official visit to Oregon and as promised, was dropped from the class (Brown is currently committed to Oregon). Michigan’s fast recruiting start, and visitation policy resulted in a situation in which Michigan’s coaches did not have to engage in fierce battles with other schools. In effect, Michigan launched 22 preemptive strikes that their opponents were unable to either respond to or deal with in time. Thanks to its visitation policy (a stroke of genius btw) other schools had little chance of poaching Michigan commitments.

Of Michigan’s 24 current commits, only 3 took official visits to an opposing school. It is worth noting that official visits are the only time when schools are allowed to pay for and fully entertain prospective athletes. Official visits also normally revolve around game weekends and are big affairs with environments that kids often get caught up with. Of Michigan’s 24 current commits, only 1 hosted an in-home visit by an opposing coach. In-home visits are often the last and best chance a coach has of selling a recruit of their school. A majority of Michigan’s current class did take unofficial visits to opposing schools during their junior or sophomore year, but did not during the year when they actually chose a school. Let me be clear, I am not bringing up the facts above to criticize the Michigan coaching staff. The Michigan coaches worked very hard to secure the majority of the class early in the year. As a result they were able enjoy fruits of their labors by not having to be involved in a high number of long and hard fought battles in attempt to fill their class.

The issue though, comes when Michigan has been forced to chase recruits for long periods of time and deep into the recruiting year. Michigan’s 2012 recruiting effort has bogged down when faced

with prolonged wars of attrition. Michigan’s success rate fell rapidly when recruiting prospects that took their official visits in the fall and winter, and hosted in-home visit from opposing coaches. In recruiting battles where Michigan and opposing schools both had the opportunity to officially host the recruit, and visit the recruit’s home, Michigan has lost an overwhelming majority of the time. Of the Final 5 targets zeroed in on by Michigan, 4 picked other schools. Michigan is currently locked in a battle with Wisconsin and Arkansas for the last of the Final 5, Jordan Diamond. The critics will argue that, in the case of the Final 5, Michigan trailed the other schools from the start. While that may be true, coming from behind to grab and secure commitments is part of the recruiting process. In the case of 2 of the Final 5, OL prospect Jordan Diamond and TE Sam Grant, Michigan was ahead or tied with others. Michigan and Oklahoma were on equal footing when TE Sam Grant began to waver from his commitment to Boston College, and started looking at other schools. Despite taking an official visit to Michigan along with teammate and current Michigan commit Kyle Kalis, and receiving Brady Hoke in his home, Grant committed to Oklahoma. Despite in-home visits by Brady Hoke and official visits to Michigan, Michigan has been unable to gain enough traction to secure a significant number of the players that were targeted in the final 2 ½ months.

Again, Michigan’s finish does not mean that the class as a whole is bad or disappointing. Michigan has a crop of players that will fill a number of key holes on the team and provide depth in much needed areas, including LB, OL, and safety. Land those players does not obscure the fact that Michigan has not closed well however. Some will argue that Michigan can simply put away the scholarships that were not used in this class, apply them to next year’s class, and everything will be fine. That is not the case, closing out the class is very important.

Despite the 24 members of the current class, Michigan had room for 28. Four players may not sound like a big number, but when you consider the fact that Michigan failed to fully address several of its biggest needs for the class, such as RB, TE, CB, and QB, those 4 scholarships become critical. Depending on freshman to fill needs is never an ideal scenario. Had Greg Mattison been asked before the season how many freshman he`d ideally like to start, the answer would have been zero. The majority of the 2012 class will not become major contributors until 2013 or 2014, at the earliest. By waiting until next year to fill a spot, Michigan will have likely pushed the date of major contribution to 2014 or 2015.

In addition, not closing well is the result of failed attempts to land players that were targeted. That may seem unimportant until you look around and see what other programs are doing, especially a certain program to the south. Not closing well in this case, and in this year, means having to play catch up with other programs. Academics standards provide a convenient excuse for failing to close well. The problem is that when you consider that the Final 5 players Michigan targeted and made inquiries into, which were not academic casualties, those excuses do not hold water.

Though a hypothesis, it seems more likely that Michigan’s poor close to this recruiting season is the result of flat out ineffectiveness when engaged in long drawn out recruiting battles with equal or greater opponents. Michigan gained a tremendous advantage through its blitzkrieg approach but has stalled at the end. Whether this is a process that repeats itself in future classes is something to look for.

I did not realize that this article would go on for so long. I will address how I feel about the new academic standards are likely to affect Michigan in the future in a subsequent article if there is interest and I haven’t been mobbed for this article. Joseph can be reached on Twitter @jbdet20 or by leaving a comment below.