The Michigan Wolverines Recruiting Class of 1998:

Made It To The NFL:

Drew Henson – Came to Michigan from Brighton High School as a Parade All-American at Quarterback & Punter while also hitting 70 home runs (Then Prep-Record). Split one season starting with Tom Brady and another on his own. Decided to join the New York Yankees before eventually returning to football where he played with the Dallas Cowboys and Detroit Lions.

David Terrell – Had a decorated Wolverine career before being drafted 8th overall by the Chicago Bears. Ranked 6th all time in receptions with 152, 4th in receiving yards with 2317; 5th in touchdowns with 23. Had a very unsuccessful NFL career, after being cut by the Bears, he went on to suffer the same fate with the New England Patriots & Denver Broncos. 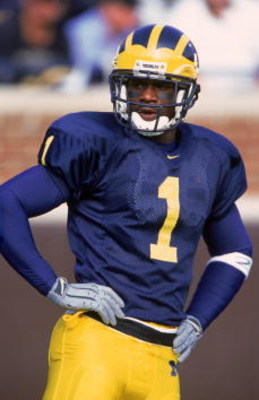 Marquise Walker – Came to Michigan rated the 9th best prospect in the country by Sporting News. Walker set the single game record with 15 receptions & is most known for his catch below. Went on to be drafted in the 3rd Round by Jon Gruden and Tampa Bay Buccaneers. An injury ruined his rookie season and he was cut. He signed with the New England Patriots in 2004 but a DUI led to him being waived again. Tried to catch on in the Arena Football League a few years later but failed to stick.

Bennie Joppru – Set the single season Michigan record for tight ends with 53 receptions. Was drafted in the second round by the Houston Texans. Injuries de-railed his career to the point he never made a pro reception. Currently works for a pet food company in Minnesota.

Larry Foote – Started all 12 games his Junior and Senior years at Michigan. Was named to the All-American team by Football News after his senior year. Drafted in the 4th Rd. by the Pittsburgh Steelers in the 2002 NFL Draft. Member of two Pittsburgh Steelers Super Bowl teams. Played one season with the Detroit Lions in 2009 before returning to the Steelers in 2010.

Victor Hobson – Started at Outside Linebacker for the Wolverines during his Sophomore, Junior & Senior seasons. Left Michigan ranked 4th all-time in tackles for a loss. Was drafted in the 2nd Rd of the 2003 NFL Draft by the New York Jets. Played for the Jets until 2007. Played briefly with the Patriots, Bengals & Cardinals in 2008. Has pledged millions of dollars to the Muscular Dystrophy Association.

Cato June – Heading into his Sophomore season, June was expected to challenge for the starting position at Strong Safety with Julius Curry, but suffered a season

ending ACL injury. His injury was the cause for Justin Fargas being moved from RB to DB. Came back to start his Junior and Senior seasons. Drafted in the 6th Rd. of the 2003 NFL Draft by the Indianapolis Colts. Finished 7th in the NFL in total tackles the year the Colts won the Super Bowl. Went to Tampa Bay as a Free Agent in 2007. Signed with the Houston Texans in 2009, was released after suffering a broken forearm; was subsequently released by the Chicago Bears.

Hayden Epstein – Was drafted by the Jacksonville Jaguars in the 2002 NFL Draft, played six games before being released. Signed on with the Minnesota Vikings for the rest of the season and served as their kickoff specialist. Sat out the 2003 Season with an injury. Played in 2004 with the Berlin Thunder of NFL Europe and the Edmonton Eskimos of the CFL in 2005. Went back to NFL Europe in 2006 and briefly played for the Eskimos again in 2008. Is currently out of football.

Julius Curry – Started 11 games in 2000 before serving as a role player after losing his Strong Safety position to Cato June. Made it to the NFL for 3 games with the Detroit Lions.

Shawn Lazarus – Started on the defensive line from 2000 to 2002. Went on to play for the Detroit Lions for a short time before a knee injury ended his career. Now works a detention officer in Summit County, OH, has dedicated his life to God and helping people find their ways through life.

Dan Rumishek – Quintessential effort guy with a non-stop motor. Started on the defensive line from 2000 to 2002. Played briefly on the Pittsburgh Steelers practice squad. Was in the Arena Football League in 2005. Currently works in Chicago as a Sales Manager.

Dave Petruziello – Spent his first two years on the defensive side of ball as a back-up. Started in 2001 & 2002 at

Left Guard. Signed with the practice squads of the New England Patriots & Cleveland Browns. Currently is the Director of Sales & Marketing at Bella Technologies in the Akron/Cleveland area.

urope and another in the Arena Football League.

Evan Coleman – Started a total of 6 games with the Wolverines. Contributed on special teams throughout his career.

Deitan Dubuc – Came to Michigan via the same Montreal high school as Alain Kashama & Tim Biakabutuka. Made his impact

mainly as a special teams player while in Ann Arbor. Made the practice squads in the NFL for Seattle, Carolina & Houston. Now lives as a personal trainer in Minnesota.

Dave Armstrong – Earned one varsity letter during his career at Michigan at the fullback position.

Walter Cross – In his first game as a Wolverine, Cross ran for 104 yards on 10 carries against Syracuse in 1998. Would finish his career with 526 total yards and 4 touchdowns.

Joe Denay – Redshirted his freshman year, was a career back-up. Currently works as a Senior Field Property Claims Adjuster for Citizen’s Insurance in the Greater-Detroit area.

Justin Fargas – Broke his leg during his freshman season with Michigan. Battled back before being moved to Strong Safety when Cato June tore his ACL. Decided to transfer to USC for his final year of eligibility. Sat out the 2001 season and ran for 715 yards in 2002. Drafted in the 3rd Rd. by the Oakland Raiders in the 2003 NFL Draft. Ran for 1,000 yards in 2007, but had split backfield duties the last few years with Michael Bush & Darren McFadden. Signed with the Denver Broncos in 2010.