Check out this school project by Mark Radwan:

. The autograph session and opportunity to meet the 2011 Wolverines team will run approximately from 2-3:30 p.m. EDT.

The event is free and open to the public. All gates at the Big House will open starting at 1 p.m. Parking will be available in the lots adjacent to Michigan Stadium and Pioneer High School. In order to expedite the autograph process and accommodate as many fans as possible, players and Head Coach Brady Hoke will autograph one item per person.

Hoke will sign autographs on the Michigan Stadium field. Michigan players will be signing autographs along the north and south concourses at the concession stands by position groups. The offensive players will be located along the north side of the Big House between sections 29 and 38, with the defensive players residing on the south side between sections 8 and 18.

Check MGoBlue.com for player autograph locations which will be determined at a later date. 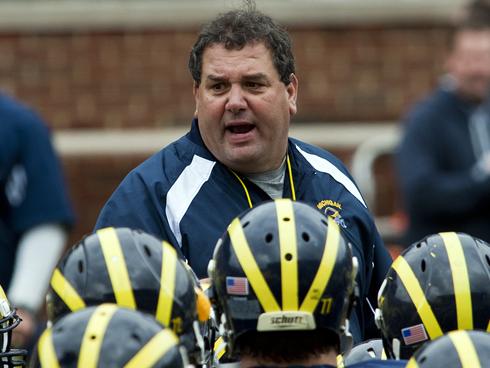 The following is by UMGoBlue.com Forum Member GoBlue75

Like most of you, I bleed Maize and Blue so it is excruciatingly painful to watch the current state of UM football (and basketball, but that’s another thread) after enjoying nearly 40 years of enviable success. However it must

be realized that this current situation is the result of years of poor decision-making around Schembechler Hall and cannot be remedied overnight – it will take years to undo the damage and return Michigan football to past levels of success. A combination of arrogance and over-confidence in the traditional Michigan brand of football gradually eroded the solid foundation that Bo produced in the 1970’s and ’80’s – and now we are seeing the harsh result of these sins.

For too long, Michigan assumed the best talent would flock to Ann Arbor solely because of the traditions of the Big House while ignoring the fact that other teams were playing a more exciting brand of ball and youngsters were being exposed to more teams via tv, while Michigan was losing to USC and other passing teams with alarming regularity, and suddenly its the 21st Century and Lloyd Carr doesn’t seem like the coolest guy on earth to go play football for … especially with all these fast exciting offensive teams around on the West Coast and elsewhere. Suddenly, playing in the Big House, in the cold, for Lloyd, does not look like the best option to most kids – this is when Michigan football began to decline, way before Rich Rod got here. We are just now seeing the result of what began 8-9 years ago… before most Michigan fans were even aware there was a problem brewing.

END_OF_DOCUMENT_TOKEN_TO_BE_REPLACED

21 Wolverines will run under the M Club Supports you banner for the last time this Saturday. Emotions will be high. The vast amount of underclassmen want to send them out with a win in their last game in the Big House. An embattled coaching staff wants to show true

progress this year by beating a Top 10 team.

For the immense amount of youth on this team, particularly the defense, 7-3 is about where I figured they would be at this stage of the season before fall camp started. Attrition and injuries on an already depth depleted defense after the start of camp have pushed more and more true and redshirt freshman into the fray, ready or not. There have been more than adequate learning opportunities for them, and they continue to progress. Sure Purdue and lousy weather last week lead the way in Michigan only giving up 9 offensive points. That said, the offense turned the ball over 5 times ( 6 if you count the 4th down failure on the wrong side of the field) and did what was needed to win in a game that probably would have ended in a loss in 2009.

Up next is Wisconsin, a team who put up 83 points last week against Indiana ( yet gained less than 500 yards). Poor Bucky the Badger ended up doing 535 pushups.

Not much about Wisconsin has changed over the past few decades. When they have a junior and senior laden team with an experienced QB, they’re good. This year, they’re darn good. A massive offensive line weighing in over 3/4 of a ton looks to push an undersized Michigan Defensive front and use play action passing to expose an inexperienced secondary.