The Little Brown Jug. As the legendary Bob Ufer used to say, its the most important piece of football crockery in the world. And while its been firmly planted in Mic

higan’s possession for the better part of the past half century, it still holds the history of both programs.

If you want a real history of The Jug, visit MVictors, Greg Dooley knows as much about it as anyone not named Fielding Yost.

Suffice it to say, MarQueise Gray brings back memories of Ricky Foggy running wild on Canham’s carpet in 1986. However for this undefeated Michigan team, at the very least Gray is dinged up, if he is even able to play at all, and quite frankly, Minnesota would have a hard time competing for mediocrity in the MAC.

Minnesota comes with a fairly balanced attack, with both running and passing nearly an equal split of its near 350 ypg average. Other than an atypical USC team, Minnesota hasn’t played anyone of any real substance, and lost 2 of those 3, including FCS North Dakota State. Whether its Gray, or True Frosh Max Shortell (incidentally someone Hoke tried to snag when he came to Michigan) neither is a very experienced quarterback, and I expect Greg Mattison to call a game to chew them up.

END_OF_DOCUMENT_TOKEN_TO_BE_REPLACED

The perfect video for the first day of Michigan Football Practice (Via @JohnClair79):

A few months back a friend of mine simply said the word, “Meechigan.” I responded, “Bob Ufer.” His reply, “Who is Bob Ufer?” Now I understand that a lot of the experienced fans know exactly who Ufer is, but a great number of the younger fans do not, and that is a problem in my eyes. Bob Ufer is Michigan, listening to him and his “cotton pickin maize and blue heart" is an experience every single Wolverine fan should have. So I will post GhostsofMichigan’s videos every week this season. By all means follow the link and listen to the rest. If I can get one person every week to learn who Bob Ufer is then I will be satisfied. Go Blue!

END_OF_DOCUMENT_TOKEN_TO_BE_REPLACED

“The Great Coaches don’t lose very often, but when they do, they have to lose with poise and dignity. Gentleman, Woody Hayes, last year at the Ohio State/Michigan game, the magnified despair of defeat reduced him to making a damn fool out of himself at Ann Arbor.”

On November 21, 1971, the #3 Ranked Michigan Wolverines were 10-0 and facing off with the 6-3 Ohio State Buckeyes. Unfortunately, due to the Buckeyes record, the game wasn’t shown on television. The following is an edited version of the games events from the coaches tape:

Just after the 8:40 mark, one of the most memorable plays in the history of college football occurs. Ivan Maisel, ESPN.com, remembers the play well:

“Late in the game, Michigan defensive back Thom Darden went over wideout Dick Wakefield, who was not only 6-foot-4 but in midair, for an acrobatic pickoff at the Michigan 32 in the final seconds. Ohio State coach Woody Hayes rushed the field screaming ‘Interference!’ When that didn’t work, Hayes shredded the sideline markers. That didn’t work, either.” 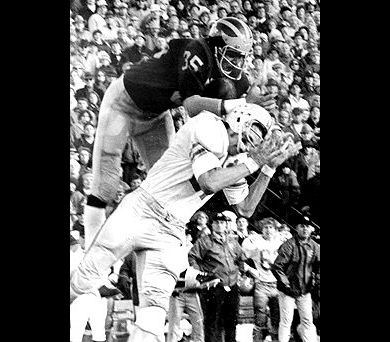 Between 1969 & ‘71, Thom Darden played a variety of positions in the defensive backfield for Michigan amassing 218 tackles and 11 interceptions. He would go on to be drafted 18th overall by the Cleveland Browns in th 1972 NFL Draft. Three times during his pro career, Darden would be named an All-Pro on his way to 45 career interceptions, setting the Cleveland Browns franchise record.

A tribute to the stellar career Darden had on the playing field can not go without mention of his problems off the field since he retired. Darden has been found to be in contempt of court over 20 times for his failure to pay child support to his ex-wife Cheryl and honestly doesn’t strike me as someone I would point to and reference as a, “Michigan Man.”