IF the Wolverines can find somewhat productive replacements for Mike Martin and Ryan Van Bergen and find consistency on offense, they should have another very good season.

END_OF_DOCUMENT_TOKEN_TO_BE_REPLACED

Inconsistency was the word of the day for Denard. Denard can go from pinpoint accuracy to complete terror in the span of two plays. 95% of the passes he threw were right on the money, the other 5% were way off the mark While it may seem unfair to judge a QB based on only 5% of his passes but that 5% can lose you games. Eventually the turnovers

are going to catch up with Michigan. The law of averages makes it inevitable. While Denard seems to be a lock to lead the Big 10 in interceptions, it’s also likely that he will lead in total yards as well after racking up another 500yd day (129yds on the ground, 337 in the air). Once again his poor throws and decisions came on plays where he didn’t set his feet and step into the throw. Whatever was said at halftime worked as Denard came out white hot in the 2nd half, didn’t turn the ball over, and quickly led Michigan on scoring drives.

Devin Gardner was called into relief action for the first time this season and the offense didn’t seem to miss a beat. Devin zipped in a very nice pass on the run plus added a TD run of his own. This game will likely not be his only meaningful action as Michigan State is sure to have a bounty out on Denard’s head.

Not a good day for the backs. I would like to blame it all on the offensive line but that would be unfair. Good backs are able to make guys miss in the hole and extend plays on occasion. The running game got no such production from the starting backs. Despite 14 carries Fitz was only managed 30yds, a 1.8ypc average. The only effective back in the game was Mike Shaw who was only inserted late the 2nd half after the other backs proved ineffective. Shaw has become the forgotten man despite having done nothing to lose the preseason form that had him named the starter out of camp. Even the protection from the backs was spotty at times, though the backs did a decent job of blocking for Denard on run plays.

END_OF_DOCUMENT_TOKEN_TO_BE_REPLACED

The next rung in the undefeated ladder up upon us. While most sane people expect a slip up(or two or more) between now and the Saturday after Thanksgiving, we’re all going to enjoy each win, and hope the Big 10 season implosion of the past two years doesn’t continue. One thing is more than likely, there a 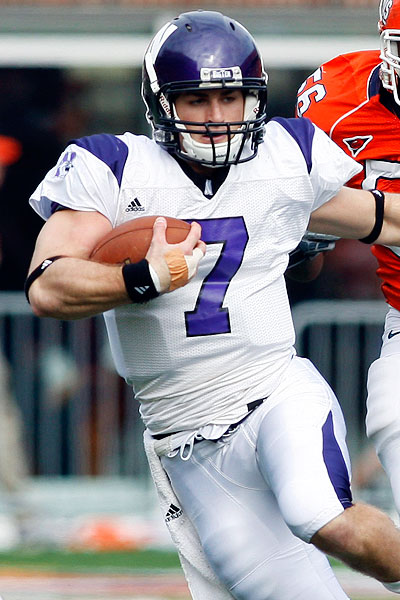 re teams who will expose our defensive weaknesses, but you have to like Michigan’s chances to adjust and at very least get the most out of the players at hand. As the season has played out, the positive is every team remaining on the schedule has holes. Before the season you could make a strong case that Michigan would easily lose 2-3 games, if not 4-5. Today, you can’t say that Michigan won’t have a chance with any game left.

The Wolverines leave the friendly confines of the Big House to play on the road for the first time all season. Northwestern will provide some serious challenges, especially if we’re to take Coach Pat Fitzgerald at his word that Sr QB Dan Persa is 100% after being pulled in a close game last week after fear his achilles injury from last season had been aggravated in his first game back. I tend to be skeptical, and think its coach speak, but time will tell. He is such a playmaker that I don’t think Northwestern stands much of a chance if he doesn’t play. If he does play, expect them to try quick 3 step drops and roll outs to try and keep the heat off Persa. In spite of playing the 2nd most experienced Offensive line in the country, Northwestern surrendered 4 sacks last week against Illinois. Key in my eyes is to not give big cushions to the wide outs, and bring pressure from the edges. With NU losing their starting RB for the season last week, don’t expect them to gash Michigan on the ground.

When Michigan has the ball, expect to see a passing game similar to last weeks Minnesota game, where Borges gets Denard in rhythm early with short, easy passes. Northwestern’s front seven is above average, but not great. However its secondary is quite suspect, giving up close to 400 yards in their loss last week through the air. While it needs to be said every week, Michigan needs play turnover free ball, and if they do, I don’t see Northwestern winning, although it may end up being a one possession game if Persa indeed plays. Michigan wins, 37-28, bring on little brother.