“I made the decision that I wanted Brady Hoke and I called him at the first earliest opportunity, and made the offer, and he accepted it, and we never talked about what he was going to be paid. The only guy I’ve ever heard of that ever took a job without asking about the pay was named Schembechler. Now we’re paying him, we got to it eventually. I want you to know that this is a guy that loves this place. What you see is what you get with Brady Hoke. He wants to be here. I had a lot of things I rated that were extremely important. But at the top of the list I wanted a coach that wanted to be here, loved this place, and was willing to do everything he needed to do within the bounds of the rules to be successful.”

University of Michigan Athletic Director Dave Brandon announced today (Tuesday, Jan. 11) the hiring of Brady Hoke as the 19th coach in the 131-year history of Michigan football. Hoke arrives in Ann Arbor after spending the past eight seasons as a head coach at Ball State (2003-08) and San Diego State (2009-10).

“We are pleased to announce the hiring of Brady,” said Brandon. “He is a terrific coach and will be a great ambassador and leader for our football program. We look forward to having him build a championship program on the field and in the classroom.”

A member of Michigan’s national championship staff in 1997, Hoke helped the defense lead the nation in rushing defense at 89 yards per game and 2.7 yards per carry. Michigan’s team posted a 5-3 record against Michigan State, Ohio State and in bowl games during Hoke’s tenure on the staff.

Hoke was named the 2010 Mountain West Conference Coach of the Year after guiding the Aztecs to a 9-4 overall record and 5-3 conference mark. He led SDSU to its first bowl game in 12 years, a 35-14 victory over Navy in the Poinsettia Bowl. Six of his players earned first-team All-MWC honors in 2010, including running back Ronnie Hamilton, the league’s freshman of the year. In his first season at San Diego State, Hoke had five players named to All-MWC teams, while 11 players were MWC All-Academic selections.

Hoke took the leadership position at his alma mater, Ball State, in 2003 and built it into a championship program before departing after six seasons for the West Coast. He mentored players to 35 All-MAC selections in six years en route to a pair of bowl game appearances in 2007 and ’08. The 2008 season marked the best season in program history, tallying a school-record 12 wins and completing an undefeated Mid-American Conference regular season campaign. His team won the west division championship in 2008 and shared the division crown in 2007.

A 1982 graduate of Ball State University, Hoke earned four letters (1977-80) with the Cardinals. He was part of the only two teams in school history to post undefeated conference seasons: as a player in 1978, and as head coach in 2008. Hoke led BSU to the 1978 MAC championship, and as a team captain in 1980 earned All-MAC second team honors.

A native of Dayton, Ohio, Hoke graduated from Fairmont East High School in 1977. Hoke and his wife, the former Laura Homberger, have one daughter, Kelly.

On November 20, 2007, Lloyd Carr announced that he would be stepping down as the head coach of the Michigan Football team effective 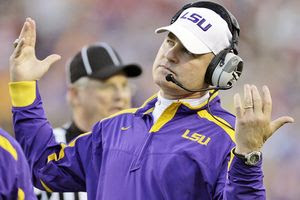 after their bowl game. Bill Martin, U of M’s Athletic Director at the time, then began a somewhat erratic search for a replacement outside the program. His search ended December 18, 2007, with the announcement that Rich Rodriguez would be taking over at U of M.

What happened exactly between those two dates has been exaggerated several times over. Several coaches names were mentioned during the time frame that were no where near getting offered the position. As much as I would like to point the finger solely at the media and websites creating “views” with their rumor-mongering, some of the responsibility belongs with the candidates.

Les Miles created the belief that Michigan was after him, leveraged him returning to his alma-mater, and scored a contract extension in the process. I still remember to this day hearing multiple insiders say that Miles was a non-factor in the search, only to see Kirk Herbstreit reporting that Miles coming to U of M was a done deal. Who do you think told Herbstreit this fairy tale?

END_OF_DOCUMENT_TOKEN_TO_BE_REPLACED

My Team, My Father and Michigan Football

What a day. If any of you are like me, you are in a state of shock. What exactly happened to UM football today?

In his eyes, I guess falling in love is sitting 2 feet in front of the 32 inch television screen for several hours at a time, entranced by a helmet, a beautiful song, an emotion that can be experienced but not described. I grew up around football, son of a successful coach who showed his son how to appreciate the game from a young age. I loved football from an early age, but I never loved a team until I was introduced to "THE TEAM." My father, as disappointed as he was, did nothing but support that love.

It might not mean much to an outsider, someone that hasn’t felt what I feel, what we all feel about Michigan Football, but I have an enormous amount of respect for my father because of that. If I have a son some day, I hope I can respect his love in the same way. When Nike first started selling replica Michigan jerseys, it was my father who convinced my mother to buy the Tyrone Wheatley replica for my birthday. In 97, we watched the Heisman presentation together, me on the edge of my seat in excitement and him with his lips sealed shut because he thought Peyton was the deserved recipient. And in January, 2005 he just gave me a hug and told me, "more important than victory or defeat is enjoying the moment together."

Two years ago my father retired from coaching, and quickly learned how much football he was actually missing. Not watching film for several hours every day certainly clears up some free time. Although he lives in Dallas and I live 3 hours away in Austin, I found myself making the trip on as many autumn weekends as possible. He definitely went the man cave route. A TV much larger than 32 inches in a room far too small for something that size made for great Saturday mornings. He even made room for the second recliner. Unfortunately, I am only able to spend a few weekends every season with him.

I guess this is where my story takes a turn and becomes relevant. Somehow and in some way, my father became a Michigan fan. It started with a text message on a random Saturday last fall.

Something along the lines of, "That is a terrible call."

"When did you learn to text? Yes, that was a terrible call. These refs are killing me."

"Yep, but that’s bound to happen occasionally. Forcier is looking good/bad/erratic right now. Why is this woman doing play by play?"

Next thing I know I’m getting text’s from my 60 year old father all throughout every Michigan game. Most of it is what he would or wouldn’t do. He think GRob is an idiot but has tons of sympathy for Rich and what he’s been through.