On the State of Michigan (5/11/11): “Michigan and Michigan State, they’re at the top right now. My dad still lives up there. (So does) my granddad and a lot of people on my mom’s side.”

On Michigan: “(Michigan assistant) Coach (Greg) Mattison said I’d have the chance to play right off the bat because I’m the kind of defensive tackle that can move around and play multiple positions. They’re only taking one nose guard and I can be that nose guard and come in and play for four years. That’s mainly what they tell me — that I can just come in and play nose for a straight four years, graduate, and take a chance of getting to the NFL.”

Deciding Factor: “One (factor will be) the business administration program. I know Michigan and Michigan State are up there in that particular subject. Who also says I can come in and start right away, and if not start, then split time right off the bat? Who is going to let me use my athleticism and not just put me in at one single position like nose guard or something like that? Those are the main factors right there.”

Sean O’Connell, UMGoBlog.com: “When he wants to be Ondre has the potential to be a top 5 defensive tackle prospect in the 2012 class. Pipkins is very explosive, strong and has very quick feet for a kid that is 320ish pounds. "Pee Wee" does tend to stand up a little too quickly, but most high school kids do. He does however have a couple of good specialty moves. Ondre performed very well at the Army Combine in January and has that has continued into some summer camps as well. If he has a strong senior year, Pipkins has a great chance to make a jump in all of the rankings. He has the skill and size to play early and could grow into a very special player down the road.”

Scouts Inc., ESPN.com: “Pipkins is a big boy and he shows flashes of being a real handful at the nose. He has good overall size, but may need to spend some time in a college weight program not only improving strength but reworking his build some to allow his size to better work for him. … (Pipkins) can be very explosive, but he does not always let this strengths pay the dividends they should and he needs to keep developing his game so that he can accentuate his strengths and be the consistently disruptive nose that he shows flashes of being.”

Allen Trieu, Scout.com – On his OSU Nike Camp Performance: “We knew he was good, but I don’t think anyone expected the big man to be as dominant as he was. At 6’4, 322-lbs, he showed power, quickness, and all the makings of a big time defensive tackle. As I said before, he can play for anyone in the country and his offer list is starting to match that. We had limited film on him before, so he was ranked conservatively, but I think a big jump is possible for him … Pipkins is a big-bodied space-eater that can command double teams, but he’s quick enough and light enough on his feet to penetrate and disrupt. Once he learns to really use his hands and consistently play under people, he’s going to be an even tougher guy to move and block. Right now he’s rated the No. 16 defensive tackle nationally, but he does have a chance to move up higher. Big kids like him that are 320 pounds and move the way he does are very rare.”

Greg Reynolds, Park Hill H.S. Head Coach: “Ondre is strong and quick off the ball, and when he can latch onto an opponent and stay low, he can take care of some gaps for sure. He gets double-, sometimes triple-teamed, which allows our linebackers to flow freely. He plays with a good motor. His job is to draw the double- and triple-team, but he is very disruptive in the backfield. We’re going to do some things next year to try to open things up for him.”

Barton Simmons, 247 Sports: “In some defensive schemes, being stout is a crucial attribute for interior defenders. For those schools that place a high value on that stoutness, Pipkins has the ideal frame. He’s 6-3, 305 pounds but he’s not fat. He’s just wide and powerful and he will demand multiple blockers and free up his linebackers behind him. On Saturday, Pipkins used that powerful frame and added good explosiveness, agility and power.”

Keith Marshall is undoubtedly one of the top high school football players in the country regardless of position. He received a Michigan offer a few weeks ago and recently answered a few questions for UMGoBlog.

Sean O’Connell: I know you have a bunch of offers, would you mind naming a few of them?

Sean O’Connell: What were your stats last season?

Sean O’Connell: Did you grow up pulling for a certain college team? If so, will this factor in on your decision?

Keith Marshall: “Yes. I liked a few different teams growing up but that won’t play a major role in my decision.”

Sean O’Connell: What are the main qualities that you will look for in a school?

Keith Marshall: “I look at the overall direction the football program is headed in, as well as the academic program.”

Sean O’Connell: Will location be a major factor for you?

Sean O’Connell: Do you have a top list of schools yet? If not, when do you expect to narrow your list?

Keith Marshall: “No, I plan on narrowing down my list this summer.”

END_OF_DOCUMENT_TOKEN_TO_BE_REPLACED

Tight end will be a major focus for the Michigan 2012 recruiting class, and Devin Funchess is one of the best in the midwest. Devin received a Michigan offer earlier this week and he also has one from Illinois. He will surely be one of the Wolverines top tight end targets this year and he was nice enough to answer a few questions for UMGoBlog!! 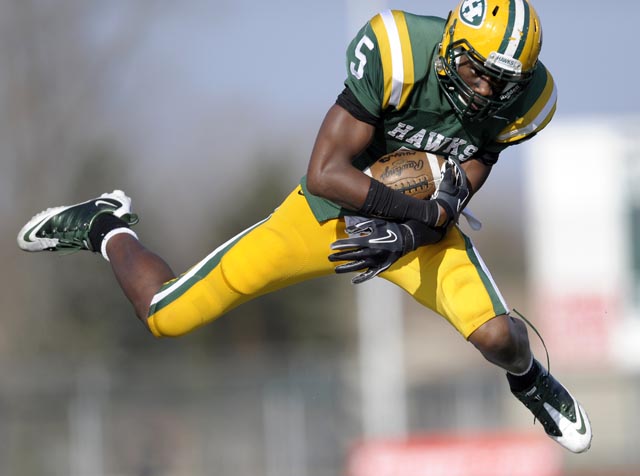 Devin Funchess: "I only have the offer from michigan so far."

Devin Funchess:" Well I like to know about the colleges academic program and how its ran, how the coaches act and work with it’s players and lastly how the program works and how I would fit into it."

Devin Funchess: "Location doesn’t matter I would just like to go where i best fit in."

Devin Funchess: "Well, when I was younger I loved Michigan State in basketball, but as I got older I started loving football more and more and kind of gave up basketball. But that has nothing to do with my decision in picking a school to go to in the near future."

Sean O’Connell: Do you have a top list of schools yet?